„If you're journalists, you should be telling people what they need to know, not just trying to harvest topics to make money. Journalism isn't about making money, journalism is about telling stories. And setting things right. Giving that voice to the voiceless.“

During his 40-year journalist career Jim has worked as a broadcast journalist and anchor on CNN International.  He formerly anchored several CNN news reports, such as The World today and The Brief. He has covered international events that have transformed the history of the end of the 20th century.

Over the past 40 years Jim has reported from nearly every corner of the globe, covering events that have shaped history: the fall of Communism in European countries, genocide in Rwanda, More…

Over the past 40 years Jim has reported from nearly every corner of the globe, covering events that have shaped history: the fall of Communism in European countries, genocide in Rwanda, the Gulf War, the Beirut siege, Bosnian war, and others. Many years of reporting experience and critical approach allowed him to create unbiased and trustworthy reports reflecting also the fact that Jim has really witnessed these often chaotic events in person. His weekly program Inside Africa also played a crucial role in exposing the misery of the people in Africa. He also participated in the CNN project "Ending Modern-Day Slavery", which reveals the truth about modern day slavery and fights for its abolition.
He has received a number of awards and recognitions, such as the George Polk Award for reporting the Rwanda genocide, the Emmy Award for his coverage of the famine in Somalia, and the Alfred I. DuPont Award for reporting on the Bosnian War. He retired from CNN in 2015 after the case of critical tweets exchange following the terroristic attack on the editorial office of Charlie Hebdo. Jim marked some of the comments on Twitter as pro-Israeli propaganda. Recently, he has focused on lecturing and writing worldwide, and remains in touch with international news. 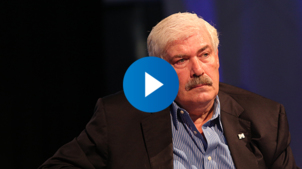